Energy is the life blood of societies and economies.  Statements like this are commonplace – and no wonder.  It neatly encapsulates energy’s pivotal role in modern life.  More than that, it brilliantly conveys the fundamental importance of delivering energy where it’s needed, when it’s needed – a vital task that requires energy ‘carriers’ or ‘vectors’.

In 2006, a paper in the International Journal of Hydrogen Energy trumpeted the imminent arrival of a new era: ‘the Era of Energy Vectors’.  Thirteen years later, the drive to develop new options for storing energy conveniently and moving it efficiently – and increasingly in lockstep with a low-carbon or no-carbon agenda – has assumed even greater urgency.

This mini-series of blogposts has outlined both hydrogen’s huge promise as an energy vector and the scope for a ‘hydrogen economy’ (a term first coined back in 1970).  But it is imperative to recognise that – despite hydrogen’s decarbonising potential – technical, cost and perception barriers remain.  Nor is the quest to identify a dominant new vector a one-horse race.  So what rival options are there – and can hydrogen beat them to the finishing line?  Prepare for a glimpse of some mind-bending parallel energy futures… 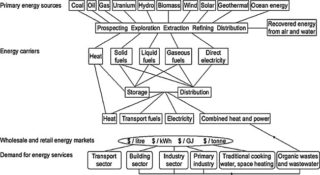 If an economy underpinned by hydrogen energy sounds exotic, an ‘ammonia economy’ sounds like a headlong sci-fi leap.  And when it comes to securing public acceptability, ammonia’s image as a nasty-but-necessary chemical surely means the concept would face a test just as severe as that facing a hydrogen economy – even though (like hydrogen) ammonia’s widespread use in industry has generated huge experience in producing and handling it.

Fundamentally, an ammonia economy would be an extension of a hydrogen economy but mitigate key drawbacks.  Non-explosive and with a superior energy density to standalone hydrogen, ammonia (NH3) is easier and cheaper to store and transport, and its hydrogen content makes it a convenient medium for moving hydrogen about.  One attraction shared with hydrogen is its versatility: potential energy applications include direct combustion to generate heat, blending with other fuels, and use as a hydrogen source for fuel cells; excellent presentations at last September’s TOTeM 45 also showed how cutting-edge combustion research is driving development of ammonia-fuelled gas turbines for power generation.

As for decarbonising potential, ‘green ammonia’ – produced using wind- or solar-generated electricity to extract nitrogen from air and hydrogen from water – is the ammonia economy’s counterpart of ‘green hydrogen’.  Proof-of-concept pilot projects include one in Fukushima, Japan, and a Siemens plant near Oxford in the UK, while 2018 saw South Australia award AUS$12 million in grants and loans for a renewable ammonia project.

But there are real barriers.  Ammonia’s toxicity presents practical as well as perception hurdles; combusting ammonia produces troublesome NOx emissions; and scalability of green ammonia manufacture remains to be proven.  Despite its promise, then, the ammonia economy doesn’t offer a quick and easy fix to the decarbonisation conundrum.

In terms of being an easy ‘sell’, ammonia stands pretty much at one end of the spectrum of decarbonising energy vectors.  At the other stands an option that can be nicely summed up as ‘the electrification of everything’.  The basic concept is to ween every sector and energy application – in industry, buildings and transport – away from their dependence on heat and power produced by ‘dirty’ fuels, and meet all their needs using electricity from renewable or decarbonised sources.

The appeal is undeniable.  But, again, this is no pain-free option.  One issue is cost compared with incumbent fuels and technologies.  Another is the perennial challenge of developing cost-effective large-scale electricity storage technologies (which, of course, is where hydrogen could play a role).  Moreover, the sheer quantity of power needed to realise the thorough electrification of industry, for example, raises serious question marks over viability – at least in the short and medium term.  [See IFRF Blogs from 7th August 2017 and 11th December 2017.]

When it comes to clean energy vectors, every potential ‘magic bullet’ has its advocates and proponents.  Take the ‘methanol economy’ (whose first cousin is the ‘ethanol economy’).  From the 1990s onwards, its cause was eagerly championed by Nobel Prize-winning chemist George Olah.  And methanol (the simplest alcohol – CH3OH) has many obvious attractions: for instance, it can provide a direct fuel for heat and transport applications, and fuel for fuel cells (either directly or after reforming into hydrogen).  Moreover, it can be manufactured from greenhouse-neutral biomass sources, while captured CO2 can be harnessed as a raw material in the manufacturing process.

Easier and cheaper to store and transport than hydrogen, methanol is making advances.  In 2012, for example, the George Olah Renewable Methanol Plant opened in Iceland, reacting CO2-rich geothermal steam with green hydrogen to produce ‘renewable methanol’ for the gasoline market.  (EU/EEA regulations allow mixing of up to 3% methanol with gasoline.)  But again, multiple issues need addressing – including cost, corrosiveness, toxicity and low energy density – if a decarbonised ‘methanol economy’ is to take off.

Yet the array of possibilities goes even wider.  How about an ‘SNG economy’ where renewable electricity is used to generate hydrogen that can be reacted with CO2 to produce methane-rich synthetic natural gas (SNG)?  Or the use of phase-change materials or heat transferring liquids in thermal energy storage (TES) systems?  Perhaps you can have too much choice…  Maybe the world should (somehow!) agree on a single vector to invest in and commit to, maximising synergies and economies of scale.  Or perhaps a ‘horses-for-courses’ approach that (somehow!) dovetails competing concepts into an optimised energy system would be more practical for delivering decarbonisation in a timely, cost-effective way.

How long can the world afford to wait before deciding?  On the other hand, what if it acts too hastily?  With overwhelming evidence still lacking and challenges facing every option, the dilemmas and hazards are obvious.

In the absence of a clear, compelling case for any individual energy carrier to become tomorrow’s front-running vector of choice, combustion technologies surely have a role to play in helping such cases to be made.  And this topic – the contribution that combustion technologies could make in realising, shaping and exploiting a hydrogen economy – will be the focus of the final instalment in this mini-series on 18th March.