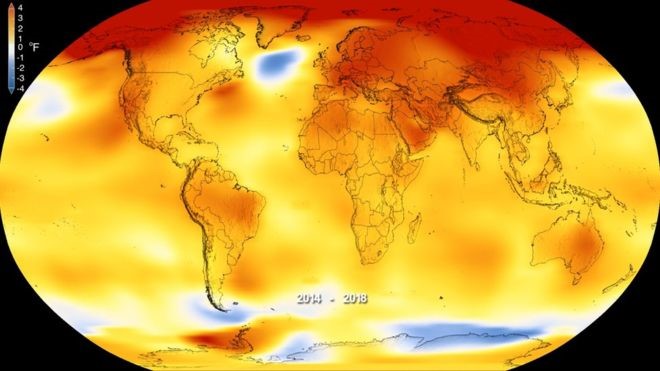 On 6th February, the US National Aeronautics and Space Administration (NASA) issued a news bulletin confirming that 2018 was one of the warmest years on record, continuing the clear warming trend.  In fact the Earth’s global surface temperature in 2018 was the fourth warmest since records began (1880) according to NASA and the National Oceanic and Atmospheric Administration (NOAA).  Since 2014, the world has experienced the four hottest years on record.  Gavin Schmidt, Director of NASA’s Goddard Institute for Space Studies (GISS) stated that “2018 is yet again an extremely warm year on top of a long-term global warming trend”.  He went on to point out that, since the 1880s, the average global surface temperature has risen about 1°C, driven, in large part, by increased emissions into the atmosphere of carbon dioxide and other greenhouse gases caused by human activity.  As can be seen from the map above, the warming trends for 2014-2018 are strongest in the Arctic region, causing continued loss of sea ice and from the Greenland ice sheet, contributing to sea level rise.  “The impacts of long-term global warming are already being felt – in coastal flooding, heat waves, intense precipitation and ecosystem change,” Schmidt added. 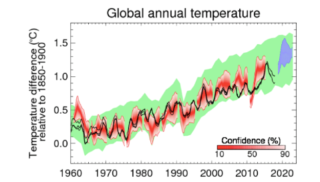 While rather worrying, the NASA news was not really surprising.  On the other hand, the release of the UK Met Office’s latest ‘decadal forecast’ on the same day was shocking.  The Met Office’s meteorologists are forecasting that average global surface temperatures could temporarily hit 1.5°C above pre-industrial levels (i.e. the ‘aspirational’ lower of the two Paris agreement targets for the end of the century) for the first time between now and 2023 (i.e. within five years).  Dr Doug Smith, a Met Office Research Fellow said: “A run of temperatures of 1°C or above would increase the risk of a temporary excursion above the threshold of 1.5°C above pre-industrial levels.  Predictions now suggest around a 10% chance of at least one year between 2019 and 2023 temporarily exceeding 1.5°C”.  While climatologists stressed that this did not mean that the world had breached the Paris agreement target 80 years ahead of schedule (since international temperature targets are based on 30-year averages), the first appearance of such an – albeit “temporary” – excursion in their decadal forecasts was a worrying development, particularly for those parts of the world susceptible to extreme weather related to El Niño events (i.e. South America, western Australia, west Africa and the Indian monsoon belt).

These two pieces of news come hot on the heels of the UN Intergovernmental Panel on Climate Change (IPCC) special report on the impacts of global warming of 1.5°C (see our Blog of 15th October 2018), which highlighted the impacts that even a fraction of a degree rise in temperature could make to coral reefs, Arctic ecosystems and communities and lives in vulnerable regions of the world.  The IPCC report stated that emissions would need to be cut by 45% by 2030 for there to be any chance of holding warming to 1.5°C.

Dr Joeri Rogelj, a Lecturer in Climate Change and the Environment at the Grantham Institute at Imperial College London and a coordinating lead author of the IPCC special report summed up these various news items of 6th February succinctly:  “Breaching 1.5°C of global warming does indeed mean that we failed to limit warming to that ‘safe’ level, but not that our understanding of a safe level of climate change has suddenly changed and climate change should go unchecked.  Every tenth of a degree matters.  So if 1.5°C of global warming would be exceeded for whatever reason, this would be a call for steeper emissions reductions.”