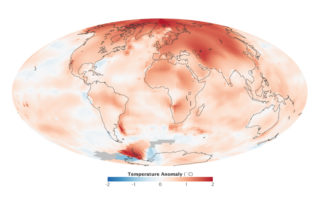 A statement by the World Meteorological Organisation using up-to-date data has shown that climate change is accelerating, most strikingly in the finding that of the 1.1oC global average temperature rise since 1850, 0.2oC occurred between 2011 and 2015. Other findings in The State of the Global Climate in 2018 are that 2015, 2016, 2017 and 2018 have been the four warmest years on record, and that the mean sea level rose 2-3 mm between 2017 and 2018. Ocean heat content is also increasing, while the pH of the ocean has continued to generally decrease, from around 8.12 around 1990 to more like 8.07 in 2017. Both Arctic and Antarctic sea ice extents have been lower than average, and also more variable, the Artic being lower than average since around 1998, and Antarctica since about 2014. Seven of the ten worst glacial mass balance years (the biggest losses from the long-term mean) have been since 2010, and while some portions of the world were cooler in 2018 than the average between 1981 and 2010 (for instance parts of Canada and Kazakhstan), the vast majority of Earth has become warmer, the worst being in the European Arctic, but North Africa and the Middle East, Europe, and parts of the USA and Australia have all also experienced significant warming. The statement was released in the run-up to UN climate change talks in New York which took place last Monday, and coincided with large climate marches by schoolchildren and others demanding greater and more urgent efforts to curb emissions.