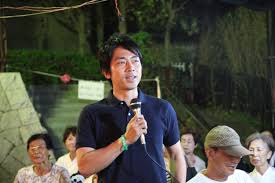 Japan’s new environment minister has told international media that the country should do more to prevent climate change, and that the issue needs to be made fun, sexy and cool for young Japanese people. Shinjiro Koizumi, son of former prime minister Junichiro Koizumi, is himself only 38, and is so popular in Japan that he is the people’s favourite to succeed Shinzo Abe, the current prime minister. He said Japan is committed to “realizing a decarbonised society, and we are ready to contribute as a more powerful country in the fight against climate change”. No further detail was given by Mr Koizumi (which was the source of some domestic criticism), but reference was made to Japan’s role in putting together the Kyoto Protocol.