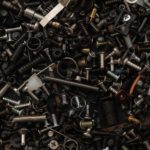 A new report by researchers at Katholieke Universiteit Leuven has looked at the future ‘metals gap’ that the world and Europe in particular will face as it attempts to make its transition to net zero greenhouse gas emissions by 2050.

Written in response to last year’s warning by the International Energy Agency of supply challenges for metals, particularly for the fabrication of batteries, wind turbines, solar panels, and hydrogen fuel cells and electrolysers, and the upgrading of power grids, the Metals for Clean Energy: Pathways to solving Europe’s raw materials challenge report attempts to quantify some of the issues and offer solutions to them. It contains an interesting chart on which technologies require which metals, with aluminium, copper, zinc, nickel, chromium, manganese, and molybdenum being commonly needed, but many other metals also featuring.

In terms of changes to demand, the metals that will experience more than a doubling in the IEA’s net-zero scenario are lithium, dysprosium, cobalt, tellurium, scandium, nickel and praseodymium (a 21-fold rise), while gallium, neodymium, platinum, iridium, silicon, terbium, copper and aluminium will have 40-100% additional demand in comparison to 2020. Globally, almost twice the volume of metals will be required to meet net-zero than would be needed under the ‘stated policies’ scenario, the major driver being electric vehicles (50-60%), followed by power grids and solar photovoltaics (35-45% together), and other technologies (5%). According to the report, recycling of metals to meet demand will only become a significant source between 2030-40 (when there are enough of them in circulation), meaning that newly-mined metals will play a predominant role until then.

The good news is that globally, there are reserves and resources indicating there are no concerns over availability. (It appears not much of it will be mined in Europe, however, meaning European industry will need to compete for supplies on the global market, before transitioning to recycling as a significant source.) However, sufficient projects to mine metals such as copper, lithium, nickel, cobalt, dysprosium, neodymium and praseodymium have not yet been announced, and innovation is required also in many areas to meet production output. As the report concludes, the “impact on demand is so strong that it is expected to be disruptive” for these metals, though “the global demand pull will soften beyond 2030 and then again after 2040”.

In this decade, price rises are expected to occur, leading to new mine projects, while the high prices also incentivise materials substitution or other means to reduce demand – such as ride sharing. Europe is expected to suffer particularly in this decade, but through an early focus on metals recycling, be in a more comfortable position in the following two decades, with ‘secondary supply’ rates being between 45-65% and even 75% for rare earth elements and lithium.

Liesbet Gregoir, lead author of the report, told the Financial Times that “Europe needs to decide urgently how it will bridge its looming supply gap for primary metals. Without a decisive strategy, it risks new dependencies on unsustainable suppliers”. The full report makes for a deep and interesting read, packed with charts and other information.