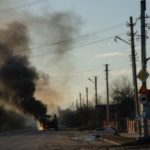 An article in The Spectator magazine has highlighted how the Russian military has been targeting Ukraine’s energy system as a part of its war against its smaller neighbour.

Published on 11 April, the article reminds the reader that electricity, gas and other fuels are required for day-to-day life: households, commerce, heating, medical care, sewerage systems, and water supply amongst the daily needs. By striking critical energy infrastructure, Russia is aiming to make cities, towns and villages uninhabitable, and the evidence suggests this is an intention on the part of Russia.

Seven power plants have been damaged with one destroyed, and transmission infrastructure also damaged, while part of the Soyuz gas pipeline that transports fuel from Russia via Ukraine into the European Union has been seized by Russian forces. In addition, 44 gas distribution stations are now not operating because of damage “to middle and low-pressure gas pipelines at a regional, city and village level, leaving around 300,000 households across the country without gas.” With heat and power plants being damaged in Chernihiv (northern Ukraine) and Sumy (north-eastern Ukraine), the Okhtyrka power plant being destroyed (also north-eastern Ukraine), and grid damage around Kyiv, Chernihiv, Sumy, Mykolaiv and Kherson regions, as well as to the Rivne and Zaporizhzhia nuclear power plants, around 1.5 million households are now without electricity.

In addition, Ukraine’s largest oil refinery, at Kremenchuk in central Ukraine, has also been completely destroyed, as has an oil processing plant at the harbour of Odesa, on the Black Sea. This destruction has meant that the only way to import fuels into Ukraine is now via train and truck from the EU. Because of this, it is likely that Russia will target rail infrastructure, furthering an already awful energy crisis for the entire country, with particular acuteness in the east of Ukraine, around the Kharkiv, Luhansk and Donetsk regions.

Ukraine’s lack of sufficient advanced medium and long-range anti-air systems means that it will continue to be vulnerable to air and missile attack, an extremely worrying situation for the nation, especially as much of the infrastructure will take a long time to repair and rebuild when that becomes possible.