SGN, one of Great Britain’s four gas distribution networks, has announced that its plans for a pioneering project in Fife, Scotland, to demonstrate 100% ‘green’ hydrogen heating in homes for the first time have been approved by Ofgem, the UK regulator for electricity and downstream gas markets.

Ofgem will award up to £18 million from its Network Innovation Competition to support the development of the new hydrogen network, triggering a further investment of £6.9 million from the Scottish government.  SGN shareholders and Britain’s three other gas distribution networks are also providing funding for the project.

Heating of homes and businesses is responsible for up to a third of the UK’s greenhouse gas emissions: a challenge that must be solved if the country is to meet its legally-binding net-zero target.  Switching from natural gas to hydrogen is one of the ways that homes and businesses can be kept warm and safe while making ground in the fight against the climate emergency.

The ‘H100 Fife’ project, at Levenmouth on the east coast of Scotland,  will lay the foundations for this change while giving residents in the local area the opportunity to be at the leading edge of the low-carbon economy.

In Levenmouth, SGN are developing a hydrogen network that will bring 100% renewable hydrogen into homes in 2022, providing zero-carbon fuel for heating and cooking.  In the project’s first phase, the network will heat around 300 local homes using clean gas produced by a dedicated electrolysis plant, powered by a nearby offshore wind turbine.

The project is the first of its kind to employ a direct supply of clean power to produce hydrogen for domestic heating – putting Levenmouth at the forefront of the clean energy revolution. 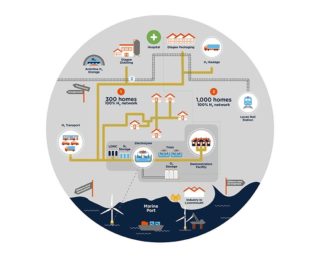 The system will be designed and built to ensure the same high safety and reliability standards expected from the current gas system.  An on-site storage unit will hold enough hydrogen to ensure supply won’t be disrupted during even the coldest weather conditions.  H100 Fife will also play an important insight-gathering role into customer appetite and interest toward hydrogen and low-carbon heating solutions.

Eligible households can participate on an opt-in basis, meaning they will have the choice to switch to hydrogen, or remain with their existing natural gas supply.  A proposed demonstration facility will allow customers to see and experience hydrogen appliances in a home-like setting prior to opting in.

The initial 300 customers joining the project will receive a free hydrogen connection, free replacement hydrogen appliances and free maintenance over the length of the project.  They will pay the same amount for hydrogen gas as they would pay for natural gas.

“We’re delighted that stakeholders have recognised the critical importance of H100 Fife,” said Angus McIntosh, SGN’s Director of Energy Futures on announcing the funding. “H100 Fife is the UK’s priority project in this area and is designed to demonstrate hydrogen distribution and in-home performance in a real-world setting.  It’s an exciting opportunity to revolutionise the way millions of people heat their homes.  The hydrogen appliances will connect to the existing pipes in the home for zero carbon heating and cooking with minimal disruption and with no need to replace existing radiators or plumbing.”

The H100 Fife project is a critical first step as the UK aims to develop 5GW of hydrogen production capacity and a first ‘Hydrogen Town’ by 2030.  The project was singled out by the Prime Minister during the launch of the UK Government’s Ten Point Plan for a Green Industrial Revolution.