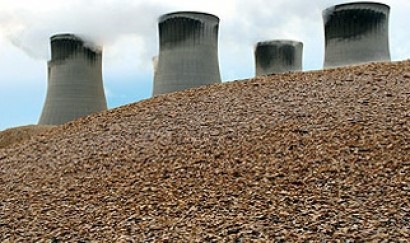 One of the best things about working on Monday Night Mail is that, as well as providing a stimulus to seek out interesting industrial combustion-related stories, it acts as a driver to reflect on different developments, spot connections between them and engage in that prized (but often elusive!) activity – ‘joined-up thinking’.  Nor is this just of academic interest.  For the combustion sector, the need to digest the ‘big picture’ and draw the right conclusions for the future has surely never been greater.

Indeed, the ability to make the case for combustion – not as the bulwark of the old but as a facilitator of a new, low/no-carbon age – is vital to keeping it at the top table of energy technologies.  And that means delivering improved combustion technologies that respond squarely to the needs of the evolving energy sector and, if possible, help to accelerate this evolution and ensure the world arrives more quickly at a decarbonised destination.

Take bioenergy.  The combustion community’s goal must not simply be to meet the sector’s needs but actually to help stimulate demand for bioenergy by delivering ever safer, more efficient and cost-effective biomass and biofuel combustion technologies that help make decisions on whether to invest in bioenergy a ‘no-brainer’.  Achieving this, though, depends on understanding the complete context in which bioenergy operates – and that’s where the joined-up thinking comes in.  Reflecting on some recent developments here in the UK (but very relevant to the world at large), it struck me how important it was not just to report on these individually but to recognise how they could fundamentally impact each other.

November saw commissioning start on Europe’s first BECCS pilot project.  The location is Drax, the UK’s biggest power station.  Once a coal-fired behemoth, two-thirds of its generating units now burn wood pellets, enabling it to be badged “the largest decarbonisation project in Europe”.  But the BECCS pilot project takes these credentials to a new level: this 6-month project is using an innovative post-combustion capture (PCC) solvent to remove 1t/day of carbon dioxide from the wood-combustion flue gases, hopefully signposting the way to the eventual capture of 50Mt/year (around half of the UK’s current emissions target) and Drax becoming the world’s first ‘carbon-negative’ power station.

Generally (but not always!), it is a good sign when a Government Minister visits a project for a photo opportunity.  It means someone, somewhere thinks the initiative definitely has ‘legs’ and that the Minister’s endorsement is unlikely to come back and bite them.  So the fact that UK’s Energy and Clean Growth Minister Claire Perry MP found time to visit the project hopefully bodes well for future interest in, and commitment to, CCS generally and BECCS in particular.

In fact, Perry’s visit was a stop-off on her way to the Accelerating Carbon Capture, Use and Storage (CCUS) Summit in Edinburgh to announce a £20M government investment in the development of industrial CCS equipment, and her opening address conveyed an uncompromising message in her characteristic no-nonsense style: “it’s time to put a rocket booster under CCUS projects”.  Bearing in mind the fundamental link between combustion technology and carbon capture mechanisms such as oxy-firing and PCC, this call to arms certainly ought to register strongly on the combustion sector’s radar.

Making the case for combustion

Reading about the developments at Drax, my mind returned to this year’s World Energy Outlook which projected increased global reliance on bioenergy under its two central scenarios (see IFRF Blog post from MNM on 10th December).  With bioenergy clearly working with the grain of the energy transition and CCS offering big decarbonising potential for carbon-containing fuels, BECCS clearly presents a doubly attractive option that could help keep combustion front and centre of the battle against climate change.

My thoughts also turned to two recent reports from the UK’s Energy Technologies Institute (ETI).  Based at Loughborough University, this well-respected organisation has done a lot of work on both bioenergy and CCS.  In October, it published findings from its review of its Bioenergy Programme.  Emphasising bioenergy’s economic importance to a low-carbon energy transition, and the importance of BECCS in offsetting the need for costlier decarbonisation measures, its recommendations included increasing biomass volumes by expanding crop production and developing BECCS technologies to deliver negative carbon emissions.  Hot on its heels came ‘Still in the Mix?’, underlining ETI’s view that CCS is “indispensable” to cost-effective low-carbon transition; according to this report, unless CCS is rolled out, the UK’s carbon abatement costs could double by 2050.

But I also recalled another ETI study, issued last year, on the importance of local energy planning in minimising the costs of decarbonising heat.  The heart of its argument was that success depended on recognising that every part of the UK has its own particular characteristics (e.g. in terms of energy resources and networks).  Not only would a single, nationwide system to decarbonise heat be less effective than a mix of solutions featuring specific approaches for specific areas, a ‘blanket’ approach would also probably cost more.

This takes us neatly to that age-old debate: ‘top down’ or ‘bottom up’?  A monolithic, one-size-fits-all approach, or something more flexible reflecting different region-, sector- and organisation-level realities?  When it comes to decarbonisation, in a world that must become increasingly light on its feet in order to face down climate change, both philosophies offer advantages as well as limitations – so surely there will be a role for both.  Whatever the case, the challenge for the combustion sector is to deliver a palette of continuously improving technology options – for BECCS, bioenergy more widely, and beyond – suited to any context, application and scale, and that users will decide to harness due to the sheer technical, safety, economic and environmental logic of doing so.

It’s about responding to ‘market pull’ and providing the best kind of ‘technology push’ – the kind that recalibrates the terms of the debate, reconfigures perceptions about what is possible and reshapes responses to the challenges ahead.  And making the case for combustion by overwhelming force of argument is a key goal for IFRF as we ring-in 2019 and look to the future with confidence.  Happy New Year to you all!