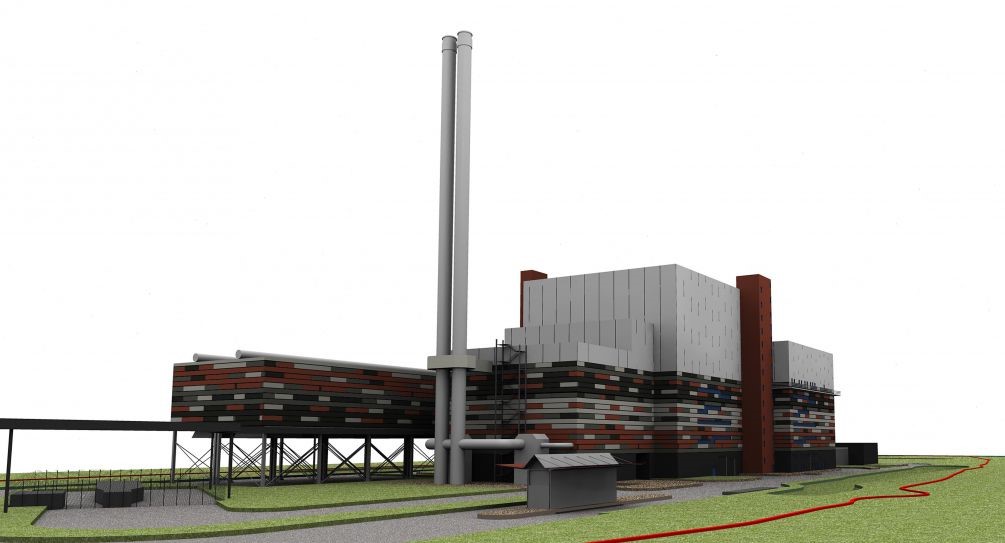 Following on from the IFRF Blogpost earlier this month on the UK government’s recent strategy on waste – ‘Our Waste, Our Resource: A Strategy For England’, published in December last year – and its stated intent “to help the companies that run EfW plants to use the heat produced to improve their efficiency, and to help industry make the right decisions over infrastructure investment”, we take a look at one such project currently under construction in the UK.

Wheelabrator Technologies, the second largest US EfW operator, is currently constructing a combined heat and power (CHP) EfW facility at Kemsley in Kent, UK.  The new facility is located adjacent to an industrial site with a large requirement for process steam – DS Smith’s Kemsley Paper Mill, which recycles retail packaging materials – making CHP an attractive and efficient option.  DS Smith’s heavy reliance on steam is already partly serviced by an on-site gas turbine CHP plant, with both the steam and electricity fed directly to the paper mill.  However, with its expanding throughput, more steam is now needed by the mill.  As a result, and owing to DS Smith’s sustainability aspiration that is targeting a 30% reduction in carbon emissions by 2030 and zero waste to landfill, the new EfW facility, fed with 550,000 tonnes/year of post-recycled waste provided by a range of waste management companies utilising local and regional waste from Kent and the South East England region, is being built by Wheelabrator, who will also operate the facility.  This waste feedstock, left after viable recyclables have been removed, will be converted into both electricity (up to 49.9MW gross) for use on site and export, on a merchant basis, to the grid under a 15-year ‘Contract for Difference’ with the UK government, as well as providing steam for the paper mill.  Overall, the efficiency of the EfW facility will be around 60% – a  significant improvement from the ~25% efficiency for a typical electricity-only EfW facility and very-much in-line with the UK government’s waste and resources strategy.

Furthermore, in-line with the fast emerging ‘circular economy’ thinking, the Kemsley EfW facility will produce approximately 125,000-140,000 tonnes of bottom ash per year, which will be reused as construction aggregates, and recover over 16,500 tonnes/year of ferrous and non-ferrous metals for recycling.  Wheelabrator is currently preparing a Development Consent Order application to allow for an increase to the tonnage throughput and a power upgrade of the facility (up to 75MW gross).

The new Kemsley EfW facility, which should come on-line late in 2019, provides over 20,000m2 of floorspace located on a 10-hectare site.  Waste will be delivered into a 50x30x26m concrete bunker before it is fed into the 50m high boiler hall.

Wheelabrator Technologies currently operates 19 EfW facilities across the USA and the UK (with three facilities under construction in the UK), providing an annual waste processing capacity in excess of 7 million tonnes and a total combined electricity generating capacity of 780MW.

Next: INFUB-12: 12th European Conference on Industrial Furnaces and Boilers