Meeting the long-term goal of the 2015 Paris Agreement on climate change — keeping global warming well below 2°C, if not 1.5°C — will be impossible without dramatic action from the world’s largest emitter of greenhouse gases, China.  Toward that end, in 2017 China began developing an emissions trading scheme (ETS), a national carbon dioxide (CO2) market designed to enable the country to meet its initial Paris pledge with the greatest efficiency and at the lowest possible cost.  China’s pledge, or ‘nationally determined contribution’ (NDC), is to reduce its ‘CO2 intensity’ (i.e. emissions produced per unit of economic activity) by 60-65% in 2030 relative to the 2005 level, and to stop the increase in absolute CO2 emissions (i.e. ‘peak’) around 2030.

When it is rolled out, China’s carbon market will initially cover the electric power sector (which currently produces more than 3 billion tonnes of CO2 per annum) and likely set CO2 emissions intensity targets (e.g., grammes of CO2 per kilowatt hour) to ensure that its short-term NDC is met.  But to help the world achieve the long-term 2°C and 1.5°C Paris goals, China will need to continually decrease these targets over the course of the century.

A new study of China’s long-term power generation mix under the nation’s ETS projects that until 2065, renewable energy sources will likely expand to meet these targets; after that, carbon capture and storage (CCS) could be deployed to meet the more stringent targets that follow.  Led by researchers at the Massachusetts Institute of Technology (MIT) in the USA and conducted with the National Institute of Clean and Low Carbon Energy (NICE) in Beijing, China, the study – part of MIT’s Joint Program on the Science and Policy of Global Change – was published in the journal Energy Economics (Elsevier) in June.

“This research provides insight into the level of carbon prices and mix of generation technologies needed for China to meet different CO2 intensity targets for the electric power sector,” says Jennifer Morris, lead author of the study and a research scientist at the MIT Joint Program.  “We find that coal CCS has the potential to play an important role in the second half of the century, as part of a portfolio that also includes renewables and possibly nuclear power.”

To evaluate the impacts of multiple potential ETS pathways — i.e. different starting carbon prices and rates of increase — on the deployment of CCS technology, the researchers enhanced the MIT Economic Projection and Policy Analysis (EPPA) model to include the Joint Program’s latest assessments of the costs of low-carbon power generation technologies in China.  Among the technologies included in the model are natural gas, nuclear, wind, solar, coal with CCS, and natural gas with CCS.  Assuming that power generation prices are the same across the country for any given technology, the researchers identify different ETS pathways in which CCS could play a key role in lowering the emissions intensity of China’s power sector, particularly for targets consistent with achieving the long-term 2°C and 1.5°C Paris goals by 2100.

Uncertainty about the exact technology mix suggests that decision makers should be wary of picking winning technologies, and should instead seek to provide incentives for emissions reductions.  While it will be challenging to meet the CO2 intensity target of 550g/kWh for the electric power sector by 2020, multiple pathways exist for achieving lower targets over a longer timeframe.

The study projects a two-stage transition — first to renewables, and then to coal CCS.  The transition from renewables to CCS is driven by two factors: First, at higher levels of penetration, renewables incur increasing costs related to accommodating the intermittency challenges posed by wind and solar, paving the way for coal CCS; Second, as experience with building and operating CCS technology is gained, CCS costs decrease, allowing the technology to be rapidly deployed at scale after 2065 and replace renewables as the primary power generation technology.

“Our study is at the aggregate level of the country,” says Sergey Paltsev, Deputy Director of MIT’s Joint Program.  “We recognise that the cost of electricity varies greatly from province to province in China, and hope to include interactions between provinces in our future modelling to provide deeper understanding of regional differences.  At the same time, our current results provide useful insights to decision-makers in designing more substantial emissions mitigation pathways.”

We have also picked-up on this study in one of our IFRF Combustion Industry News blogposts – see here to read Patrick Lavery’s ‘take’ on this interesting study.

The current status of CCS activities in China

The CNPC Jilin Oilfield CO2-EOR Facility began commercial operations in 2018, reaching an injection capacity of 0.6Mtpa, becoming the world’s 18th large-scale CCS facility.  The project began R&D activity in 1990, with pilot and demonstration testing commencing in 2008 and reaching 1.12Mt of cumulative injection in 2017.

Several smaller-scale Chinese facilities are collectively capturing close to 1Mtpa of CO2 and have included several path-finding facilities in the electric power sector and in CO2 storage applications.  Among them, Shenhua Group’s, now CHN Energy’s, Ordos CCS Demonstration Facility has injected approximately 300,000tCO2 in the period 2011-14.  This was one of the largest demonstration-scale CCS facilities in the world to have injected CO2 into a dedicated geological storage reservoir, as well as being a pioneer in CO2 injection evaluation. 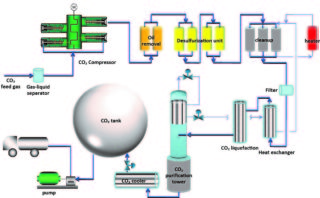 A number of commercial CCS plants are currently being developed.

Sinopec Qilu Petrochemical CCS Facility has started retrofitting 0.4Mtpa of CO2 capture unit to the existing coal/coke water slurry gasification unit at a fertiliser plant.  Expected to be operational in 2019, the captured CO2 will be transported by pipeline to the Shengli Oilfield for enhanced oil recovery (EOR).

Additionally, the Yanchang CCS Facility in Shaanxi Province has advanced its development of CO2 capture units at two coal-to-chemicals plants.  A 0.05Mtpa unit has been in operation since 2012, with a larger 0.36Mtpa capture unit expected to be operational by 2020.  Captured CO2 will be used for EOR in oilfields in the Ordos Basin in central China.

A further ~20 CCS facilities at various scales are in advanced/early development planning, signalling a new wave of Chinese CCS facilities that will come online through the 2020s.