NET Power has announced its plan to develop and build what is claimed to be the world’s first utility-scale natural gas-fired power plant with near-zero atmospheric emissions. The project fully integrates power production with transport and underground storage of CO2. Due to be built at Odessa in Texas, it will be near Occidental’s Permian Basin and is expected to be online in 2026.

The technology is based on the Allam-Fetvedt cycle which has been reported in a previous IFRF article. It produces power whilst capturing nearly all emissions with its patented oxy-fuel combustion and supercritical CO2 cycle. Producing clean, on-demand power at low cost,  which addresses critical issues of air quality and land use, it is claimed to virtually eliminate emissions of nitrogen oxides (NOx), sulphur oxides (SOx) and CO2.

This announcement comes on the back of previous technology development at the La Porte demonstration site, culminating with synchronisation to the Texas electric grid in the autumn of 2021. NET Power has also announced a partnership with energy technology company Baker Hughes in February 2022 to develop and market a suite of integrated equipment and technologies, including supercritical CO2 turboexpanders.

“Having demonstrated the capability of the technology at La Porte, and having partnered with Baker Hughes to commercialise the NET Power system, we are excited to accelerate the deployment of this game changing technology,” said Ron DeGregorio, CEO of NET Power. “This plant allows for the quick ramp up in NET Power’s global deployments, providing a clear and meaningful pathway to near emission-free reliable power.”

NET Power selected the project located at an Occidental hosted site near Odessa, Texas from a number of potential early adopter project candidates. The project aims to produce around 300 MW of carbon-free power and will transport captured CO2 to a permanent underground sequestration location through Occidental’s existing Permian CO2 handling infrastructure and operations.

NET Power will engage its strategic shareholders to support the project:

Pre-Front End Engineering and Design (Pre-FEED) studies have been completed with full FEED work to commence in the first quarter of 2023.

The project will be financed through a combination of NET Power’s current capitalisation programme, investments from existing shareholders and new project financing. Additionally, NET Power is pursuing government support available at the federal, state and local level, with special focus on grant and loan opportunities arising from the Bipartisan Infrastructure Law. The long-term opportunity for NET Power projects is further improved with the Inflation Reduction Act and its enhancements to the 45Q carbon capture tax credit available to capturing facilities. 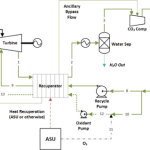