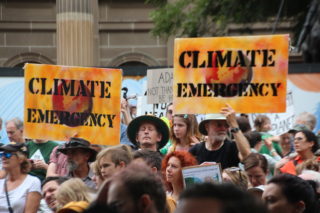 Over 11,000 scientists from 153 countries have published a declaration of a climate emergency in the journal BioScience. Organised by ecologist Professor William Ripple of Oregon State University, the declaration is timed for the 40th anniversary of the First World Climate Conference (in Geneva 1979), and states that scientists “have a moral obligation to clearly warn humanity of any catastrophic threat and to ‘tell it like it is’.” It urges public discussions of climate change to go beyond average global surface temperature rises and to instead adopt a range of indicators “that convey the effects of human activities on GHG emissions and the consequent impacts on climate, our environment, and society.” The paper itself suggests what these indicators should be, splitting them into two groups. The first covers human activities – the global population, the total fertility rate, the population of ruminant livestock (cattle, sheep, goat, yaks etc), per capita meat production, world GDP, tree cover loss, Brazilian Amazon forest loss, energy consumption, air transport (in passengers per year), institutional fossil fuel assets divested, total anthropogenic CO2 emissions, per capita CO2 emissions, percentage of greenhouse gas emissions covered by pricing, carbon price (assumedly a global average), and total fossil fuel subsidies. The second is of climate markers – carbon dioxide concentration (in ppm), methane concentration (ppb), nitrous oxide concentration, surface temperature change, minimum Arctic sea ice cover, Greenland ice mass change, Antarctica ice mass change, glacier thickness change, ocean heat content change, ocean acidity, sea level change relative to 20-year mean, area burned in the United States, extreme weather events, and annual financial losses from weather/climate events. Most of these indicators have negative trends (in terms of the climate), notable exceptions being declines in global fertility, decelerated forest loss in the Brazilian Amazon, and an increase in the proportion of GHG emissions covered by carbon pricing (now around 14%). Six critical steps to improve the indicators are suggested. One of them, headed ‘energy’, is to quickly implement “massive energy efficiency and conservation practices and [replacement of] fossil fuels with low-carbon renewables and other cleaner sources of energy if safe for people and the environment”, while leaving all remaining fossil fuels in the ground and “carefully pursue effective negative emissions using technology such as carbon extraction from the source and capture from the air”. Other steps are to promptly “reduce the emissions of short-lived climate pollutants, including methane, black carbon, and hydrofluorocarbons”, curtail habitat and biodiversity loss, eat mostly plant-based foods, shift away from pursuit of GDP growth and “the pursuit of affluence”, and stabilize and then reduce the global population. The declaration is lengthy, but interesting reading, though one wonders at the political and technical practicality of the extent of the proposed measures.