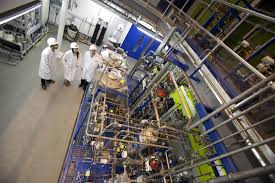 The Chemical Engineer has interviewed Professor Chris Rayner, founder of C-Capture, the technology company that is partnering with Drax in the north of England to trial carbon dioxide capture from one of its biomass-fired power generation units. C-Capture’s non-amine solvent is less energy intensive that amine-based ones, as it takes around 1.5-2.0 GJ to strip a tonne of CO2 from it, whereas an anime-based solvent is considered good if it only takes 2.0-2.5 GJ per tonne. In addition, C-Capture’s solvent is less corrosive than amine-based solvents, meaning lighter/cheaper construction materials can be used, and it is also non-hazardous. In the interview, Professor Rayner makes several important points regarding the carbon capture industry in general. One is that because of the scale of the amount of carbon dioxide needed to be captured, storage will be the end destination of most of it, rather than utilisation (though of course some utilisation is a form of storage). Another is that efforts around the world to develop and deploy CCS need to be stepped up, considering the urgency of the problem of climate change. A third is that because of the scale needed, carbon capture systems need to use simple chemistry that is available at large scale, while being as environmentally benign as possible. Substances may exist which would capture CO2 “really nicely”, according to Professor Rayner, but they are not available cheaply or at scale. Aside from its work with Drax, C-Capture is looking at other facilities – iron, steel, and cement, and hydrogen production – at which it could apply its technology, and is also looking at ways its capture technology could be retrofitted most easily.