For the purposes of the IFRF Combustion Handbook, combustion is defined as the oxidation of fuels, typically, but not exclusively, through the rapid combination of hydrogen and carbon contained in the fuel with the oxygen contained in atmospheric air. This rapid combination releases heat at relatively high temperature, which may then be used for the heating of industrial processes, including the generation of steam and high-pressure hot water. This may be very simplistically represented as:

An industrial [GLOSS]fuel[/GLOSS] may be a regular fossil fuel such as coal, crude oil, or natural gas. These may be processed from their raw “as found” state to produce a wide variety of refined fuels such as blended pulverised coal, desulphurised coal gas, Liquified Petroleum Gases (LPGs), liquid fuels ranging from gasoline through to residual oils and so forth.

Industrial Fuels are discussed in greater depth in associated Combustion Files – see below.

Alternatively oxygen depleted (vitiated) air – for example Gas Turbine or Diesel exhaust gases – may also be used as a comburent.

Industrial comburants are discussed in greater depth in associated Combustion Files – see below.

Traditional industrial combustion processes were primarily based on the concept of the comburent – almost always, regular atmospheric air – being encouraged to rise through a bed of fuel originally containing wood but later various forms of lump coal and most recently, domestic solid waste. Such a system is described as a stoker fired boiler of which there a several basic types. Figure 1 shows an example of a stoker fired boiler. A photograph of the firebed is shown in Figure 2. 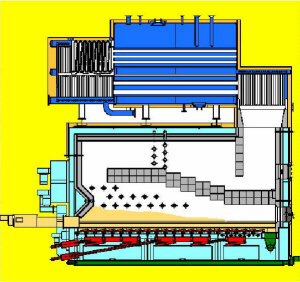 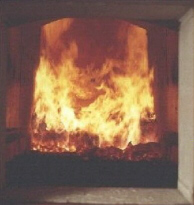 Figure 2: View of fire-bed in a stoker fired boiler

In recent decades such solid fuel combustion modes, have given way, at least in relatively large coal fired scale boilers, to pulverised coal burners, where the coal is milled to a very fine powder – typically 75% by mass < 75mm, and passed through a burner in suspension in an atmosphere derived from the coal dryer. This produces a turbulent diffusion flame, an example of which is shown in Figure 3. Arrays of such flames are used to fire boilers of various designs. 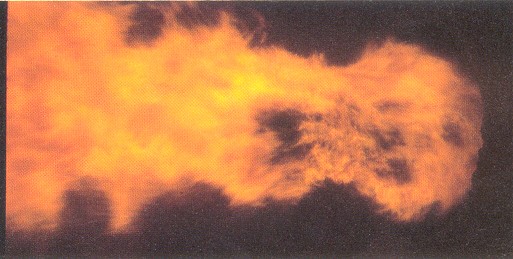 Most recently, there has been a trend towards the development of various forms of fluidised beds – bubbling and recirculating – for the smaller scale combustion of coal and other solid fuels. See Figure 4.

Liquid fuels have been traditionally burned in various forms of pot burners, but modern liquid fuel burners employ atomising devices to produced fine droplets of the fuel which initially are evaporated in the throat of a burner which gives rise to a turbulent diffusion flame, an example of which is shown in Figure 5. 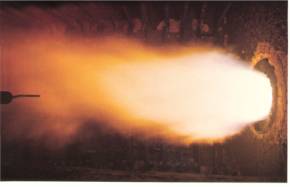 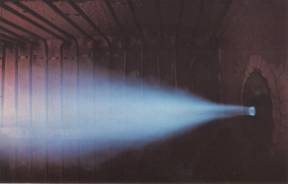 The flame examples introduced in the foregoing paragraphs display different characteristics and shapes which depend upon the fuel and the burner design. These aspects will be explored further in a cluster of Combustion Files.

General and detailed descriptions of industrial fuels and comburents are given in series of Combustion Files elsewhere in this handbook. It is clear from the various examples of combustion given above, that there is a variety of combustion modes used in industry.

Flames are of considerable importance in industrial process heating and have formed the basis of the research of the International Flame Research Foundation for over 50 years (Ref to Spirit of IJmuiden), and thus get extensive attention in this handbook. However the various form of bed stokers, particularly fluidised beds, are also of particular importance in industry and will eventually receive the attention they deserve in due course.

The reader is encouraged to dig deeper and deeper in this mine of industrial combustion related information.

Acknowledgement
This Combustion File contains images from a number of sources including the IFRF M2 trials and magazine articles authored by Bengt-Johan Skrifvars and Pia Kilpinen of Åbo Akademi and Hartmut Spliethof of TU Delft.