In some large industrial furnaces heated by axial diffusion flames it is found that the simple laws of the free jet may be applied directly to estimate flow and mixing (CF4; CF7) This Combustion File sets out the principal flow and mixing properties of isothermal free jets.

2. Principal properties of a free jet

An isothermal free jet issuing from a nozzle as shown in Fig. 1 into a calm and infinite atmosphere possesses the following noteworthy properties:

Figure 1: Variation of velocity and concentration on the axis of a jet as a function of the distance from the nozzle exit 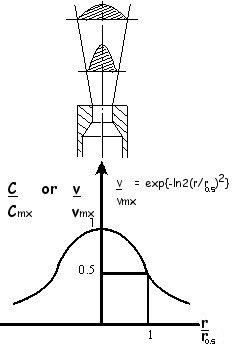 Different authors have proposed other values for some of the constants used in this combustion file, including GEFGN themselves (see Combustion File 26). Rhine and Tucker (1) have given a useful review of this topic.

This Micrograph has been extracted from the “Recueil Des Fiches Techniques” published in the Revue Generale de Thermique.

We are unaware of the original author’s name. However we would like to thank the author and Gaz de France for their permission to use the information.