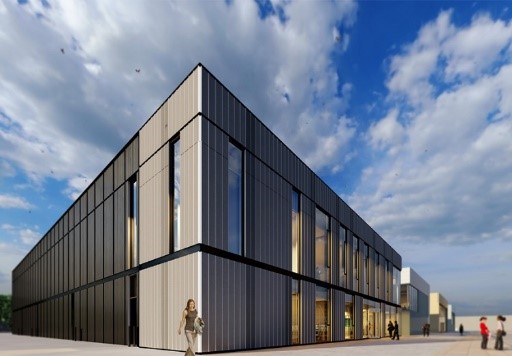 Just over a week ago, it was announced that a new £21+ million ‘Translational Energy Research Centre’ (TERC) is to be established in Sheffield’s Advanced Manufacturing Innovation District.  The new centre – currently funded by £10 million from the European Regional Development Fund (ERDF), £7 million from the UK government’s Department for Business, Energy & Industrial Strategy (BEIS) and £4m from the PACT National Facilities/University of Sheffield – will give regional SMEs and global companies, new technology start-ups, and academic and research teams access to advanced testing facilities and the opportunity to collaborate with leading academics in Sheffield on low-carbon energy research.  Through industrial and academic partnerships, companies will be able to use the TERC facilities to test, optimise and demonstrate their technologies at a pilot/commercial scale.

PACT was established in 2012 as an open-access ‘national centre of excellence’ for developing safe, high-efficiency, reliable, environmentally-acceptable and cost-effective fossil fuel-based power generation and CO2 capture technologies (as part of carbon capture and storage (CCS) schemes).  Over the last seven years, PACT has enabled government-, industry- and university-led projects to conduct meaningful tests in an industrial setting, allowing results to be scaled confidently for commercial application, thus significantly shortening development times.  Since commencing operations, PACT has delivered a strong track record of successful projects (42 to date – involving 70+ industrial companies and 40+ academic partners engaged in some 670 test days – with a total value of nearly £70m and income to PACT of over £8.4m), demonstrating that it can deliver cost-effective access to research infrastructure whilst operating a sustainable business model.  Despite having a strong ‘forward order book’ of projects vying for experimental rig-time (nine projects requiring 400+ test days over a five-year period have been submitted, with a value totalling over £19m and potential income to PACT of ~£9.5m), a key part of the PACT strategy is to continue to expand research facilities in support of both academic research and ‘higher TRL’ research better aligned with industry’s needs.  However, the current site of PACT at Beighton (near Sheffield) is space constrained; the ambition has been, for some while now, to relocate the facilities to an enhanced PACT centre (dubbed ‘PACT-2’) in response to:

Question 1:  So, I hear you ask, how does ‘PACT-2’ relate to the announcement about TERC?

Well, TERC certainly incorporates all of the ‘PACT-2’ thinking and already-funded enhancement activity, but it goes wider in its scope – pulling in other already-funded activity around developing advanced low-carbon energy systems (including those based on renewable energy technologies), ultimately bringing all of the rigs together on the new site with many of the larger rigs located on skids at the rear of the new building, and integrating all of the various items of equipment, systems and analytical and control services into a versatile and flexible ‘smart energy management’ system.  This bigger vision (TERC) will form a unique centre at an international level, integrating conventional and renewable energy systems at a pilot-scale level.  TERC will take several years to complete (due to be fully operational by the end 2022), although the ‘PACT-2’ element will be completed and running by the end of March 2021.

In addition to supporting regional SMEs and stakeholders, TERC’s mission is global in scope.  Five years’ analysis of both the national and global market for experimental CCUS research services, and the increased revenue opportunities afforded by the proposed investments, has shown that research income to TERC can be expected to reach £20m over the 2019-2033 period.  Assuming a similar leverage rate to what has already been achieved at PACT, this would see TERC involved in a £200m+ regional and global low-carbon energy research programme.  This fits very well with the University’s wider energy initiatives, i.e. establishing an ‘Energy Institute’ from this year, significantly increasing its academic team, and its current hosting of both the IFRF, and the UK CCS Research Centre.  TERC will form a clear focus and a hub for all of this activity, as well as the channel to international collaboration through its engagement with IFRF as well as the International Test Centre Network (ITCN) and the European CCS Experimental Laboratories (ECCSEL).

Question 2:  What experimental equipment will TERC have of relevance to IFRF and its membership?

TERC will comprise some 24 pilot-scale rigs that can be broadly categorised as shown in this graphic below: 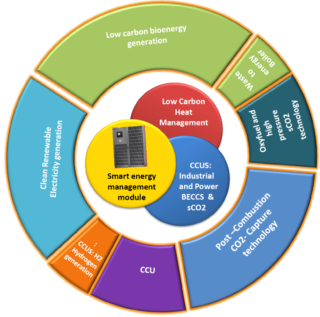 Specifically, the pilot-scale rigs that will be located at TERC are:

These various rigs and facilities, together with the extensive range of online and laboratory analytical equipment that will be utilised at TERC, will be highly integrated around a smart energy management module and low-carbon heat management system, with synergies between the rigs and processes optimised (e.g. hydrogen produced by the electrolyser used in the MCFC, PEMFC and methanation facilities, SNG from methanation and other synthetic fuels from the CCU fuels plant used in the gas turbine and the liquid fuels CHP turbine, CO2 from the various capture technologies used in the methanation/synthetic fuels rigs and MCFC cogeneration plant, etc.).  The following diagram attempts to illustrate this:

All-in-all, a very impressive and highly flexible set of rigs at a very useful scale for industry and academia to utilise, plus a highly integrated facility that will enable ‘whole energy system’ considerations to be investigated.

The comprehensive nature of the facility, plus the fact that investment and grant funding has now been secured to the level of £21m, has attracted interest from other funding bodies that may well commit additional funds to be used to enhance the online and lab-based analytical equipment at TERC.

From the perspective of IFRF (i.e. interests around ‘combustion’ in its broadest sense), TERC will represent, arguably, the largest and most comprehensively equipped combustion and fuels R&D facilities in Europe, and a world-class facility.

Question 3:  So, what role will IFRF have in TERC and vice versa?

IFRF is ‘writ large’ in the investment case that was made to the University of Sheffield and in the various proposals made to ERDF and BEIS seeking grant funding.  Indeed, because Professor Mohamed Pourkashanian (IFRF’s General Secretary and the Director of PACT) will be the Director of TERC, the evolution of the PACT-2 and TERC concepts were central to Sheffield’s bid to host IFRF back in 2015; similarly, IFRF’s location in Sheffield has been an integral part of the emerging TERC vision.  Furthermore, IFRF (through me as its Director) has fed into the emerging TERC proposals, and I was involved in presenting the PACT-2 concept to BEIS officials in mid-2018.

As part of our new partnership with TERC, IFRF will relocate its headquarters from the city centre campus of the University of Sheffield to the new TERC site in the Advanced Manufacturing Innovation District on the outskirts of Sheffield, where organisations such as Boeing, Maclaren, Rolls-Royce, Ansys, TWI, the High Value Manufacturing Catapult, UKAEA – to mention but a few – have already established (or are in the process of establishing) R&D facilities.  This – quite correctly in my view – puts combustion and fuels R&D firmly in the midst of a high-tech, advanced manufacturing community:  Right where it should be!  This move will happen during 2020 so that we can take full advantage of the PACT-2 facilities as they come on stream by the end of March 2021 (and the broader TERC ‘energy systems’ facilities a year later).  As such, IFRF will becoming an ‘embedded’ partner at the TERC, with the PACT-2/TERC facilities (which address all aspects of interest to us – combustion, gasification, energy-from-waste, CCU/CCS, hydrogen utilisation, integration of renewables, energy storage, biomass/biofuels, sustainable aviation fuel production, smart energy systems, etc.) right ‘on hand’, enabling IFRF to become increasingly active in collaborative research, both for and with our member organisations, and more widely with other international partners.

As this exciting development begins to take shape, we will bring you regular updates… watch this space!

For more information on these exciting developments, why not take a look at the press releases from 27th June from the University of Sheffield and BEIS concerning TERC.