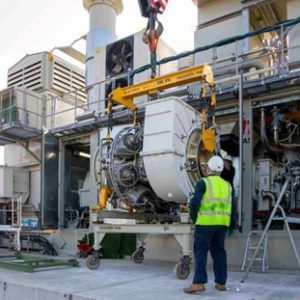 A consortium of ENGIE Solutions, Siemens Energy, Centrax, Arttic, the German Aerospace Center (DLR) and four European universities have announced the successful completion of the first stage of the Hyflexpower project. The aim of the Hyflexpower project is to demonstrate that green hydrogen can serve as a flexible means of storing energy which can then be used to power an industrial turbine. The project, first announced in 2020, involves significant funding by the European Commission, with two-thirds of the €15.2 million investment coming from the EU’s Horizon 2020 Framework Programme for Research and Innovation. The four universities involved are NTUA Athens, Lund in Sweden, Duisburg-Essen in Germany and UCL in London.

Located at the Smurfit Kappa Saillat Paper Mill in Saillat-sur-Vienne, France, the programme, is described by Siemens as being the first industrial facility in the world to introduce an integrated hydrogen demonstrator. The hydrogen is produced on site with an electrolyser and used in a gas turbine with a 30% hydrogen/ 70% natural gas mixture (by volume) for power generation. It marks the implementation of the first industrial-scale power-to-X-to-power demonstration with an advanced turbine with high hydrogen content fuel. This project will allow the partners to understand the technical feasibility of using hydrogen while retaining much of the existing energy infrastructure.

The next trials for the Hyflexpower project are scheduled for Summer 2023 where hydrogen ratios of  up to 100% will be undertaken.

Gaël Carayon, project director at ENGIE Solutions, said: “Ambitious projects like this one require taking partnerships to the next level and being united in a joint mission to make decarbonisation a reality. Hydrogen will play a crucial role in the interaction between renewables and electricity storage and generation.”