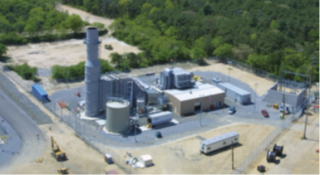 The New York Power Authority (NYPA) has announced the results of a first-of-its-kind green hydrogen demonstration project, which showed decreased carbon emissions when using hydrogen blended with natural gas. The demonstration project, led by NYPA in collaboration with EPRI, General Electric and Airgas (a company owned by IFRF member Air Liquide), is the first retrofit of an existing US natural gas facility that enabled use of hydrogen blended with natural gas to power the plant and generate electricity. NYPA and its industry collaborators demonstrated that the plant was fully operational while safely using the hydrogen blend.

The demonstration was carried out at the 45-MW Brentwood plant, located on Long Island, New York, consisting of a GE LM6000 gas turbine equipped with single annular combustion (SAC) technology. SAC is not a dry-low emissions (DLE) combustor technology and instead requires water injection for NOx control. The plant is also equipped with post-combustion catalyst systems for NOx and CO control. The plant’s location and layout, combined with its relatively low capacity factor as a peaking unit, facilitated the temporary modifications required for this demonstration project. NYPA fired blends of 5–44% hydrogen by volume with natural gas, to identify and document the resulting impacts on gas turbine outlet emissions (CO2, NOx, CO) and unit operation. Hydrogen cofiring was not performed during unit startup and shutdown operations.

Full results of the demonstration have been published by EPRI as part of the Low-Carbon Resources Initiative (LCRI) programme, where the Executive Summary 3002025167 is available to download for free.

NYPA collaborated with General Electric which has significant experience with hydrogen and similar low-BTU fuels. GE assisted in the building of the state-of-the art hydrogen/natural gas blending system, whilst EPRI’s Low-Carbon Resources Initiative helped design the project and served as advisors on the technical evaluation. Airgas supplied the renewable hydrogen for the testing. Sargent & Lundy was the original architect engineer of the Brentwood plant and provided engineering expertise as well as safety reviews, and Fresh Meadow Power developed the piping system that delivered the hydrogen to the GE-designed mixing skid and, ultimately, into the turbine.

Observation: NOx increases at higher hydrogen levels. During testing, GT NOx levels increased by up to 24% as the hydrogen fuel fraction increased. At the same GT load, maintaining a constant GT outlet NOx level while increasing the hydrogen fuel percentage required almost a linear increase in the water injection flow rate. It is important to note that this NOx increase observation is specific to LM6000 SAC technology and may not apply to dry-low emissions combustors.

Observation: CO decreases with higher hydrogen fuel fraction. CO levels decreased as much as 88% as the hydrogen fuel fraction increased during testing. Even with increasing water injection rates for NOx control, CO levels decreased with increasing hydrogen percentages. This is believed to happen due to enhanced CO oxidation in the presence of OH radicals formed during hydrogen combustion.

The report also details several of the challenges that would prevent ongoing plant operation using the blend, including volume of hydrogen required, little industry experience with blending, and restrictive code requirements. 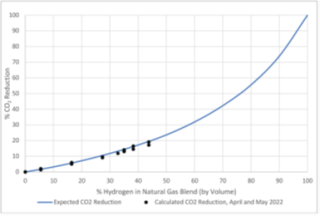 The project aligned with NYPA’s strategic VISION2030 priority to decarbonize its natural gas plants and was designed to test and demonstrate the feasibility of using new low-to-zero carbon technologies to help achieve zero-carbon emissions by 2035 (NYPA’s goal) and informs the state’s goal to have a 100% zero emission electricity sector by 2040. New York’s Climate Leadership and Community Protection Act (CLCPA or the Climate Act) calls for an orderly and just transition to clean energy and economy-wide carbon neutrality. From new energy storage initiatives to expanding and upgrading transmission to piloting hydrogen use for generation, considerable progress is being made to transform New York’s power system to catalyse a clean energy economy.