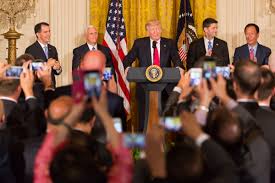 US President Donald Trump has told his energy secretary, Rick Perry, to use emergency powers to devise ways of keeping coal and nuclear power plants operational. Under the Defense Production Act of 1950, the US government has the power to intervene in business for the sake of national security, and it is through this legislation that the Trump administration believes it can take legal steps to help both coal and nuclear power generators. It appears the argument for national security rests on the assertion that coal and nuclear plants store their fuel onsite, which is debatable – most renewable energies would seemingly qualify on the same grounds because they do not require any fuel, and the Federal Energy Regulatory Committee last year turned down an attempt by Mr Perry to subsidise coal and nuclear plants because they provide resilience. Details of what the steps would actually consist of are unclear, but may involve higher prices paid for the electricity generated from coal and nuclear plants. Oil, gas and renewable companies have all criticised the move, while coal and nuclear companies have unsurprisingly supported it. Energy analysts believe that litigation against any steps would begin almost immediately after they were put in place.