The relatively low flame speed of methane means that most natural gas flames are unstable when no particular precautions are taken. Depending on circumstances, there may be:

It is, therefore, necessary to use a stabilising device. This can be one of the following:

This Combustion File relates to the latter.

An obstacle (often known as a bluff-body) is attached to the natural gas nozzle within the combustion air flow to create a wake. The axis of symmetry of the bluff body is parallel to the direction of the air flow. 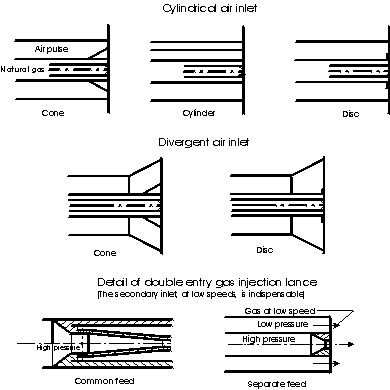 We shall see the part played by the low velocity annular gas flow later. Its presence is essential to stabilise the flame using a wake.

3 Analysis of the stabilising action of a wake

The obstruction placed in the middle of the air flow generates a wake in which recirculation currents are produced due to the existence of a low pressure zone downstream of the flat front surface of the bluff body. As we move along the axis downstream from the bluff body, we find: 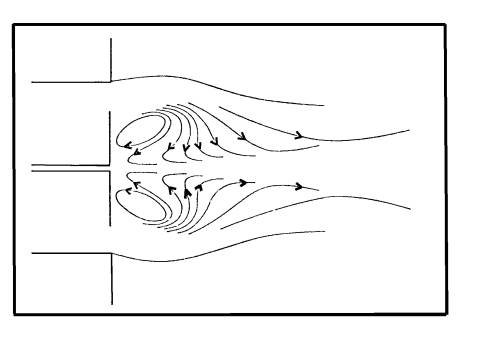 Figure 2: Flow downstream of a stabilisation disc with axial jet

A tulip-like flame can, under certain conditions, arise in the bluff body wake. The main flame does not appear to be attached to the injector and its ignition begins approximately at the extremity of the wake.

The tulip flame is a diffusion flame the main role of which is to increase the temperature of the mixture found at the periphery of the central gas jet, so that it exceeds the ignition temperature. Once ignited, this flame is a permanent source of ignition for the main flame. In a cold furnace, it is necessary to ignite the tulip flame in the wake.

The tulip shaped flame is not created downstream of the bluff body unless secondary, low velocity gas flows into the wake. This local gas injection into the air rich recirculation currents of the wake creates the tulip diffusion flame. The gas flow injected into the wake need not necessarily be large; its mass flow can vary within fairly wide limits.

For all stabilisation methods a relationship exists between two parameters, or two combinations of parameters, the representative curve of which is the boundary between the areas of stability and non-stability. All pairs of associated values on this boundary represent the stability limits (ie the performance) of the stabilisation method considered.

With regard to stabilisation by wakes, a relationship has been established between the limiting thrust for detachment of the central natural gas jet, the air velocity and the diameter of the downstream face of the bluff body. This relationship gives rise to a set of curves for different disc diameters (Fig. 3a).

In order to obtain a single curve representing the stability limits for all thermal inputs, bluff body sizes and combustion air velocities, we have plotted G/QD (the [GLOSS]specific thrust[/GLOSS] divided by the diameter of the downstream face of the bluff body), as a function of the variable V/D2 (the ratio of the air velocity to the square of the bluff body diameter). 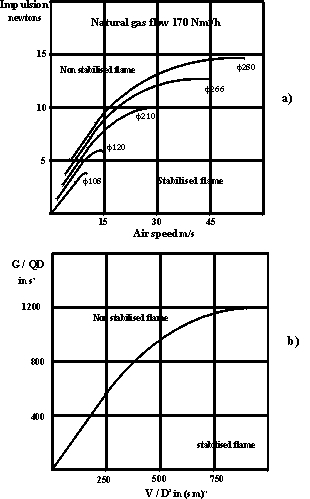 5. Influence of bluff body stabilisation on the flame characteristics

However, there are also effects that are specific to wake induced flame stabilisation. In particular, bluff body stabilised flames are not attached to the injector but sit at the end of the wake. At the root of the jet, the kinematic viscosity of the gas is relatively low and mixing is rapid. Ignition thus occurs at a point where the amount of oxygen induced by the natural gas jet is relatively high. The resultant intense combustion limits soot formation.

6. Practical application of the above properties

The preceding analysis may be used to design an effective flame stabiliser – an example is given in Combustion File 5 (see Related Combustion Files).

This Combustion File has been extracted from the “Recueil Des Fiches Techniques” published in the Revue Generale de Thermique.

We are unaware of the original author’s name. However we would like to thank the author and Gaz de France for the use of the information.