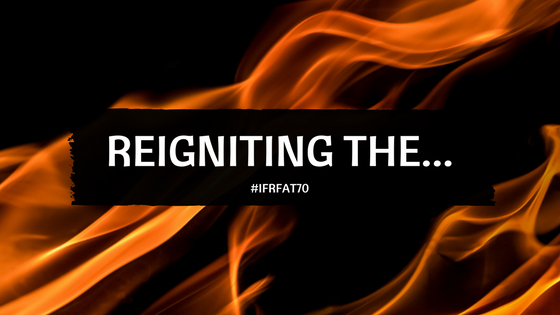 It’s 1948 and the countries of Europe are still reeling from the impacts of the Second World War.  The challenges of post-war reconstruction, huge movements of people, bankrupt economies, continuing rationing and severe controls on just about all aspects of life are creating a mood for change – political, social and technological.  The urgent need for reform and innovation is ‘in the air’, fuelled by people’s desires to build a prosperous, thriving and peaceful world, but still chaffing under austere restrictions and shortages.

Nowhere are such imperatives and desires more acutely felt than in Europe’s shattered iron and steel industry, where there is a clear recognition of the challenges of huge immediate and future demand for steel and, despite manpower shortages, the vital need for a step-change increase in productivity.

Two years earlier, a KNHS delegation had visited the USA to see developments there with firing steelmaking furnaces with heavy fuel oil.  Other visits, meetings and conferences confirm that oil-firing makes good sense, and KNHS’ furnaces at IJmuiden are duly converted, yielding large productivity benefits.  However, these conversions also bring a number of technical questions to the fore…  what burners would work best with fuel oil?  What pressures and quantities of atomising steam are optimal?  At this stage, the only way to find the answers is by trial-and-error adjustments to the operating furnaces.

“We know nothing about oil firing, but the others know little more!” a somewhat depressed Mr JE de Graaf (KNHS’ Head of R&D) confides to his co-worker Ir GW van Stein Callenfels after attending a conference in London.  There and then the two men decide what is needed – an experimental furnace of a suitable scale (a fifth to a quarter the size of the IJmuiden furnaces).  Within just a few months KNHS approve the project and the rig is designed and built – such is the priority given to this matter.

Meanwhile, on the other side of the North Sea in England, Mr Meredith Thring, Head of the Physics Department at the newly-formed British Iron and Steel Research Association (BISRA) and various members of his staff (including a young Reg Mayorcas busy developing instruments to measure combustion conditions in open-hearth furnaces) are also working on these problems along with Professor Owen Saunders of Imperial College, and are undertaking trials at the Shotton Steelworks in Wales.  The previous year, Thring had met de Graaf in Switzerland at a meeting of the Iron and Steel Institute and, on hearing about the experimental furnace at IJmuiden, arranges to visit de Graaf and van Stein Callenfels and see it for himself.

From these various discussions held during 1948, it is apparent that various parties in the Netherlands, Great Britain and France are all interested in undertaking experimental studies on near-commercial-sized flames.  But all are agreed that experiments of this kind are much too expensive for a single organisation – or indeed a single country – to undertake, particularly in these austere times.

A highly determined and imaginative man, Meredith Thring isn’t prepared to give up!  On 22nd November 1948 he produces BISRA Physics Note No. 40: ‘Proposals for the establishment of an international research project on luminous radiation’, written in both French and English, and containing a notional commitment from BISRA to contribute to such an activity.  Thring invites both JE de Graaf of KNHS and Henri Malcor of IRSID to join him for dinner in Kingston near London, and the rest, as they say, is history…

In just four sides of double-spaced typing, Meredith Thring makes a highly compelling case for an international co-operative programme of research.  It’s worth a read, just for its elegance of structure and argument, let alone its ground-breaking level of open cooperation and sharing (particularly so in an immediately post-war world).  Why not read it for yourself here.

1. ‘Statement of the problem’

Thring sets out, in two short paragraphs, the importance of – yet poor understanding of – luminous radiation.  Citing eminent combustion scientists (Schack, Hottel, Hangelsdorf, Rummel, Vek) he points out that while heat transfer by non-luminous radiation can be calculated with high accuracy, no formulae exists to help the industrial boiler or furnace designer regarding luminous radiation due to its high dependence on the combustion process, as well as the fuel and air quantity and fuel composition.  The rate of combustion needs to be determined, which, in turn, means large-scale experiments to enable both combustion and heat transfer to be studied simultaneously (e.g. taking into account heat losses to the furnace walls for a range of air/fuel flows and ratios).

2. ‘Brief outline of work which would be necessary to establish the fundamental laws of luminous radiation’

In stating the problem, Thring points out that it is really a modelling issue, requiring the application of ‘similarity theory’.  For any resulting models to be relevant to differing combustion situations, experimentation at a reasonably large scale is needed, with studies conducted over a wide range of parameter values.  He outlines both an approach and a basic programme of work to advance this activity.  He also points out that probes for measuring flame temperatures (e.g. suction pyrometers and sensible heat meters), in-flame analysis and gas/particulate sampling are required, and that other advanced analytical techniques need to be developed.  Thring cites prior work by Hottel, Broughton, Senfilaben, Benedict and Mie in these various areas.

Despite the importance of solving this problem to a range of industrial furnace applications (e.g. open-hearth steel furnaces, glass melting furnaces, oil stills, ceramic kilns, etc.), the cost of implementing such a research programme (Thring estimates in the order of £30k/year – more than £760k/year at 2018 prices), involving a sizeable team (he indicates ten full-time staff, a considerably greater number of university students or other junior staff, and a full-time mathematician), is “too much for any one Western European country to bear it alone”.  Thring therefore proposes that “three or more” countries collaborate, contributing suitable salaried personnel, hosting arrangements, an experimental furnace, specialised apparatus and other in-kind contributions such as fuel, or by paying a cash contribution.  He alludes to discussions about using the KHNS furnace and suggests that work could start in early 1949.

In order to move things forward quickly, Thring suggests establishing an international committee of representatives from the various interested national groups to direct the work.  Three/four such groups from each of the Netherlands, Great Britain and France were to be invited to an initial meeting, reporting back to their Boards and seeking permission to participate actively.  He suggests that, although it wouldn’t be necessary to engage full-time paid staff provided appropriate staff were seconded from the member countries, a full-time committee secretary would be required to organise the activity and administer the committee.  Finally, he confirms BISRA’s commitment to provide seconded staff and equipment up to a value of £3-4k (£75-100k at 2018 prices).

Getting the ball rolling

I’m sure that many of us have read proposals for exciting ventures that have then either crawled forward painfully slowly, only to wither and die as funding, goodwill and enthusiasm evaporate, or not even get off the drawing board!

Well, this one did gain traction with the various parties that Thring names – perhaps due to the elegant simplicity of its vision, perhaps due to the relationships forged between the proponents of the idea during 1948.  A subsequent ‘Physics Note’ from Thring on 21st December outlined preliminary technical proposals for the scheme of research (even including diagrams of the experimental furnace in IJmuiden), and proposing parallel activities on engineering trials, probe trials, laboratory experiments and theoretical investigations over an three-year period, with valuable results anticipated within the first 18 months.  As Thring had anticipated, work did start in IJmuiden early in 1949 (see the blog ‘Reigniting the… 1950s’), with the first team of IFRF Investigators (Reg Mayorcas on secondment from BISRA, England, and Marcel Michaud from Air Liquide, France, working with van Stein Callenfels and Guss Mayer of KNHS, the Netherlands) preparing for the first performance trials.  Initially, Mayorcas and Michaud ‘commuted’ to IJmuiden for these trials, but during 1950 moved to Velsen Noord to form the first resident team.

And here we are, 70 years after Thring drafted his vision for an international collaborative research!  The seven ‘founding fathers’ of IFRF (de Graaf and van Stein Callenfels from the Netherlands, Thring and Saunders from Great Britain, and Ribaud, Malcor and Cheradame from France) have all sadly passed away, but generations of Investigators, managers and directors have followed in their footsteps in IJmuiden, Livorno and Sheffield, maintaining their vision of IFRF and holding to the same precepts of collaborative research, close fellowship in a common cause and open sharing of our findings – all forged in the post-war Europe of 1948.  Paraphrasing what Sir Isaac Newton wrote to Robert Hooke in 1675:  “If we have seen further, it is by standing on the shoulders of those seven Giants.”

Editor
Thanks to the six former/current IFRF personnel who have contributed their thoughts on Meredith Thring’s Physics Note No. 40 and the beginnings of IFRF. We have now followed the history of IFRF all the way back from the present to its origins in 1948. The quote above from Tom sets the scene for the next – and final – instalment in our ‘Reigniting the…’ series, when we will travel ‘back to the future’…