A few days before last December’s United Nations Climate Change Conference (COP24) in Katowice, Poland, the European Commission (EC) adopted a “strategic long-term vision for a prosperous, modern, competitive and climate-neutral economy by 2050”.  This strategy – ‘A Clean Planet for All’ – points to how Europe can lead the way to climate neutrality by investing in technological solutions, empowering citizens and aligning action in key areas such as industrial policy, finance and research, while ensuring social fairness for a just transition.  In the press release that accompanied the launch of the strategy, the EC’s Commissioner for Climate Action and Energy, Miguel Arias Cañete said: “Today, we are stepping up our efforts as we propose a strategy for Europe to become the world’s first major economy to go climate neutral by 2050.  Going climate neutral is necessary, possible and in Europe’s interest.  It is necessary to meet the long-term temperature goals of the Paris Agreement.  It is possible with current technologies and those close to deployment.  And it is in Europe’s interest to stop spending on fossil fuel imports and invest in meaningful improvements to the daily lives of all Europeans.”

The strategy doesn’t set out any specific objectives for solving the climate change challenge.  Rather, the EC states that “the purpose of this long-term strategy is not to set targets, but to create a vision and sense of direction, plan for it, and inspire as well as enable stakeholders, researchers, entrepreneurs and citizens alike to develop new and innovative industries, businesses and associated jobs.”

The EC cites the latest special Eurobarometer survey (November 2018) – ‘The Future of Europe’ (Special Eurobarmometer 479) – as its mandate for its 2050 climate-neutral vision.  This public opinion poll, which involved face-to-face interviews with 27,339 citizens across all 28 EU member states, found that 93% of those surveyed believe that “climate change is due to  human activity” (interestingly, 51% “partly due”, 42% “entirely due”), and 85% agree that “fighting climate change and using energy more efficiently can create economic growth and jobs in Europe”.  These high figures are indicative of the growing awareness of – and acceptance of – climate change and its anthropogenic dimension; indeed, only 4% of those polled thought that it is “not at all due to human activity”, with 2% “don’t know” (and 1% “don’t believe in climate change”).  The Eurobarometer survey also recorded very high levels of attribution of various extreme weather events to climate change – 86%, 86%, 85%, 83% and 74% respectively thought that heat or cold waves, floods, droughts and wildfires, hurricanes and heavy rainstorms, and landslides “are due to climate change”.  This seems likely to be due to the increasing levels of citizens experiencing the impacts of extreme weather events in the last few years:  Indeed, the EC’s ‘A Clean Planet for All’ strategy reports that “weather-related disasters caused a record €283 billion in damages last year [2017] and could impact around two-thirds of the European population by 2100, compared to 5% today”. 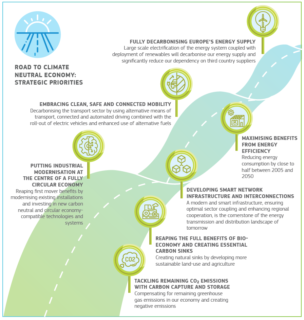 The strategy and supporting documentation highlights a number of key strategic priorities on the ‘road to a climate-neutral economy’.  The first of these – ‘fully decarbonising Europe’s energy supply’ – is a topic that we have examined a lot recently in IFRF blogposts, so I’ll leave this one aside.  Perhaps the strategic priority that is highlighted as being of particular concern to the EC in terms of its current – and growing – contribution to climate change is transport, i.e. the priority of ‘embracing clean, safe and connected mobility’.  The EC certainly recognises that the transport sector will have to decarbonise rapidly if Europe is to achieve climate neutrality by 2050.  The strategy itself identifies a range of possible actions in this regard, namely to: “roll out carbon-free, connected and automated road-transport mobility; promote multi-modality and shifts towards low-carbon modes such as rail and waterborne transport; restructure transport charges and taxes to reflect infrastructure and external costs; tackle aviation and shipping emissions using advanced technologies and fuels; invest in modern mobility infrastructure and recognise the role of better urban planning.”

The importance of decarbonising the transport sector by the middle of this century is also the theme of another ‘2050 vision’, this one from the sustainable transport NGO Transport & Environment (T&E), which released its own plan for the decarbonisation of the EU transport sector in October last year – a few weeks before the EC launched its strategy.  This plan took the form of a synthesis report – ‘How to Decarbonise European Transport by 2050’ – drawing together separate T&E ‘roadmaps’ published over the previous 18 months covering decarbonising the car, road freight, aviation and shipping sectors.

T&E identify transport (and bunkers) as “Europe’s largest climate problem”, accounting for over 27% of Europe’s total greenhouse gas emissions in 2018 (20.7% transport, 6.6% bunkers), with the next biggest contributors being public electricity and heat (22.7%) and industry (22.7%).  Furthermore, emissions from the sector have increased from a 1990 baseline (currently at about 125% of the 1990 level, compared to all other sectors which are now at below 80% of their 1990 levels – see presentation). 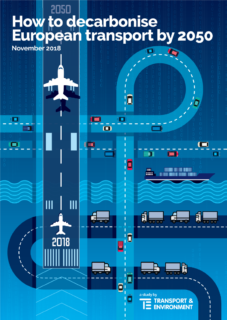 The report demonstrates that transport can and must be fully decarbonised by 2050, at the very latest, in order to limit global warming to 1.5°C compared to pre-industrial levels, but also to “ensure Europe’s competitiveness, its energy sovereignty and the health and well-being of its 500 million citizens”.  This will involve the last internal combustion engine vehicle being sold in Europe by the early 2030s (and legacy fleets being phased-out), with battery-electric and hydrogen-fuelled cars best placed to take over.  For road freight, electric trucks (using batteries or catenary wires) are the most economical pathway; for shipping, battery-electric, hydrogen/ammonia-fuelled fleets; for aviation, synthetic (bio) fuels coupled with carbon pricing.  The report concludes: “Decarbonising transport is possible, but each single assumption that went into our modelling would require new policies to realise them.  In most instances this will take the form of new laws and regulations, very often at European level.  The more we delay those measures, the harder it gets to achieve a decarbonised transport sector by 2050.”

This viewpoint was reflected a few weeks later at the launch of the EC’s climate-neutral Europe strategy by the EC’s Commissioner for Transport, Violeta Bulc, who said: “All transport modes should contribute to the decarbonisation of our mobility system.  The goal is to reach net-zero emissions by 2050.  This requires a system approach with low- and zero-emission vehicles, strong increase in rail network capacity, and a much more efficient organisation of the transport system, based on digitalisation; incentives for behavioural changes; alternative fuels and smart infrastructure; and global commitments.  All this driven by innovation and investments.”

Two very interesting reports, but for transport sector decarbonisation at least, everyone is ‘singing from the same hymn sheet’!