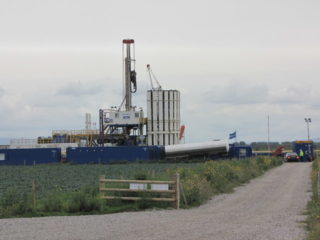 The UK government has indefinitely suspended fracking in England in response to concerns that the practice could lead to earthquakes. In the lead up to the announcement, the Oil and Gas Authority – the regulator of the oil and gas industry in the UK – had said that it is not possible to predict the probability or size of tremors from fracking. This in turn had been in response to a 2.9 magnitude earthquake that had been caused by fracking at Cuadrilla Resources’ Preston New Road site in Lancashire, in the north of England. With the announcement coming during an election campaign, it may be somewhat tactical, taking away some of the thunder from opposition parties who are calling for a permanent ban on the practice. Business Secretary Andrea Leadsom said that the ban was not permanent, because fracking is a “huge opportunity” for the UK, but that it will not be lifted until fracking is proved to be safe. Professor Richard Davies from Newcastle University told the BBC that the problem in prediction lies in the imaging techniques that are currently employed by the industry not providing enough resolution to detect many of the faults that crisscross the UK. A calculation will need to be made by industry, therefore, as to whether it is worth investing in higher-resolution imaging technology to be able to continue to try to establish fracking as a practice in England.